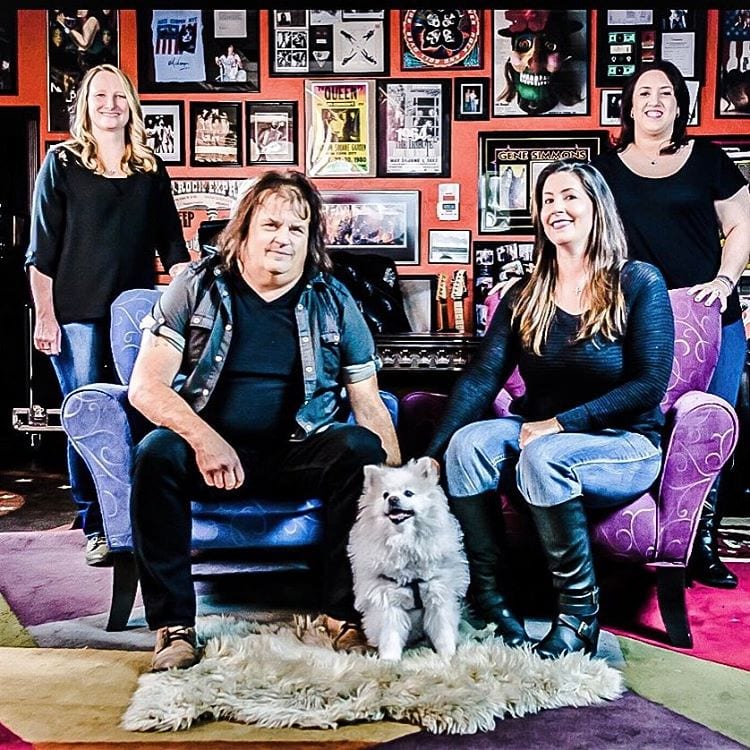 The ‘80s were an amazing time…

Among the fascinating things the decade offered us, like hair bands and legendary music, Toucan Productions came into existence! It was the perfect culmination of passion and opportunity.

In 1985, a young, teenage Robin Alvis was rocking in the band, Ibex, performing by night and storing the band’s show equipment in his parents’ garage by day. Recognizing a business opportunity, Robin also rented out the band’s staging and lighting during down time – thus, Toucan Productions was born. As the years rolled on, Robin acquired more equipment, and in turn, began focusing more on putting on killer shows for others and less on his own.

Misty Myers joined Toucan in 1991, just as the new decade was taking root.  Her entrance into the business was marked with growth. Toucan moved into a more legitimate warehouse space and also added several more full-time team members. Their small business was beginning to explode, so in 2008, Toucan purchased a 50,000 square-foot warehouse near downtown OKC. With 25 full-time employees, a massive inventory, and over 1,000 annual bookings, they are now the largest provider of lighting, staging and sound in Oklahoma and one of the largest in the Southwest.

My relationship with Toucan Productions goes back to the late 90's. Toucan has always gone above and beyond - both technically and with a great staff! Having used Toucan from one off club, casino and festival dates to having them provide lighting production for tours with Hinder, we are truly pleased and could not say enough!
Fabrizio Del MonteTour Manager for Hinder
Not only does Toucan have everything we need for our tours, but their customer service is second to none. They always go out of their way to make sure we're happy. Hinder will always be a loyal customer of Toucan.
Cody HansonHinder
Thanks for all your help in producing our TNA Wrestling show at the state fair. Your unflappable spirit and solution-based managing style were much appreciated. I look forward to working with you again in the future.
Steve SmallDirector of Production TNA
Toucan has been our touring lighting vendor exclusively since 2007. On an international tour of this scale, doing 90 shows a year in 120 days, Robin and his team have never let us down. Their personnel, gear and insight are nothing short of impeccable. Not only have they provided top-notch gear for our tour, but they've also provided us with technicians that always go beyond the call of duty. Anyone with a checkbook can buy gear, but Toucan's service and implementation is the best in the business. I highly recommend them to anyone needing staging, lighting or production services.
Jeff PittProduction Manager for George Thorogood & The Destroyers
Toucan Productions has been a great resource for our production. They've provided us everything from outdoor staging with sound and lights to the latest intelligent lighting and equipment for our in-game production. I like that their stage/production hands show up early with a full understanding of what needs to be done. They've also been flexible with last-minute changes/requests with a ``can-do`` attitude.
John LeachDirector, Events & Entertainment for Oklahoma City Thunder
I just wanted to say thank you for supporting OK Humane! You really helped us out with the lighting for Woofness on 9th Street. We were able to find loving homes for 219 dogs and cats at this event. This would not have been possible without support like yours. You will definitely be my first call for our next event!
Amy ShodesCentral OK Humane Society
On behalf of the OSU foundation, I would like to thank the entire Toucan team for helping to make our Stoney LaRue concert a success. Clint and the rest of the crew did a fabulous job and were a joy to work with! I know Toucan worked with us to stay on budget and we truly appreciate all the sacrifices you made to help this event be successful. We would love to work with you again!
Abby FoxOklahoma State University
I've been working with Toucan Productions since 1999. Over the last 16 years, Robin, Misty, Chauncy and the team of professionals there have helped bring to reality everything I've dreamed of with their state-of-the-art lighting, staging, and sound. Through intense deadlines and production demands, they have always exemplified the utmost professionalism, and faced every obstacle with a ``can do`` attitude. They are fair, reasonable, and cost effective with their rentals. I would highly recommend Toucan Productions for any production need. They are top notch.
Scott FloydLifechurch.tv/Worship Pastor
Toucan Productions has been an integral part of DCF Concerts' daily operation for over 20 years. We use Robin and his team for every indoor and outdoor event for the highest quality staging, lighting and sound in the entire region. From rentals to purchases, Toucan sets the highest standard for every aspect of our concert productions and executes events of all sizes with professionalism and great style. Thank you, Robin and Toucan, for your outstanding service!
David FitzgeraldPresident of DCF Concerts
0